Why we don't offer drop-down menus & tabs, and what to use instead

You want to build a chart or map in which your readers can switch between categories/regions with a drop-down menu or tabs on the top – and now you notice that this is not possible with Datawrapper. In this article, we explain why that is and offer alternatives to show your data anyway.

Datawrapper is a tool to create data visualizations with which you can explain something to readers. When we started Datawrapper in 2012, our tool was aimed at journalists. Our users are now also found in many areas outside journalism, such as finance, governments, statistic agencies, NGOs, etc. But we still hold dear to some of the journalistic values that inspired us from day one:

Datawrapper visualizations are made for an audience  that most of the time knows less about the subject than the author. Your readers trusts you to inform them about everything important.

So if some information is important for a chart, map or story, it shouldn't be hidden in a layer that readers first have to reveal by clicking a button.

The danger of this is that a large part of the audience might never find the hidden content.

Instead, everything important should be visible right away, at the first glance at the chart. That's why many of our charts allow you to add free annotations. It's also the reason we don't offer drop-down menus above charts or maps, and don't implement tabs.

But that doesn't mean you won't be able to show the data you want to show.  Often, the alternative is to use another chart type or to show multiple charts/maps. Here are examples for both:

Let's say you want to show the ethnicities for San Francisco, but give your readers a chance to also compare them with the ones from the US. Our column charts still offer tabs, so using them might be your first idea:

However, other chart types can show the data for both San Francisco and the US "in one tab", like this grouped bar chart:

Notice how it's actually easier to compare the two regions with each other, now that you see them in one chart instead of jumping back and forth between tabs.

You can make sure that people pay attention to your most important data first (the data you would have in our column chart tabs first) when you color it in a darker/more satured color.

However, you can see that these long labels don't fit well below the columns, especially on mobile devices. So you can rotate the columns by 90 degree to create a bar chart. Here's the same data as a split bar chart:

Instead of column or bar charts, try split/stacked/grouped bar charts. If you have lots of data that can't fit into a chart type, ask yourself if it's really necessary to show all this data and what the most important point is you want to make. Everything is important? Then consider using a table.

Let's look at another option to bring all your data in your article or website:

Showing multiple charts or maps instead of cramming everything in one gives you the space to explain what your readers can or should see in each visualization.

Here are two examples: The left one by the New York Times shows the same chart type, but with different data. The right one is a "charticle" on our blog. Both use the space between the chart to take the reader by the hand and offer explanations: 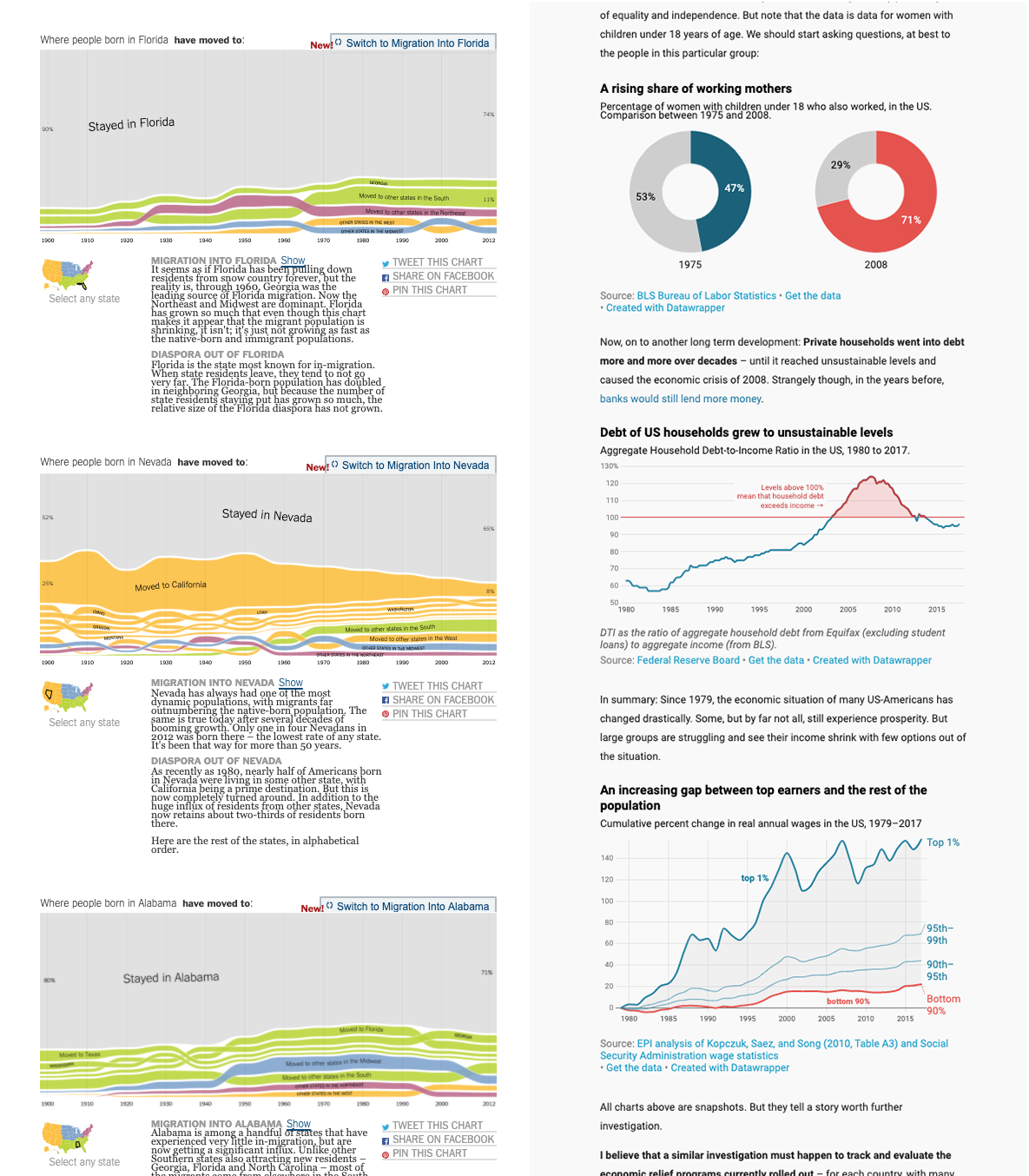 If that much explanation isn't necessary, "small multiples" might be the way to go. Small multiples are several small charts of the same chart type that show different categories of the same data. They're great to let readers compare differences.

You can also create small multiples yourself with different Datawrapper charts, like we've done in this and this Weekly Chart: 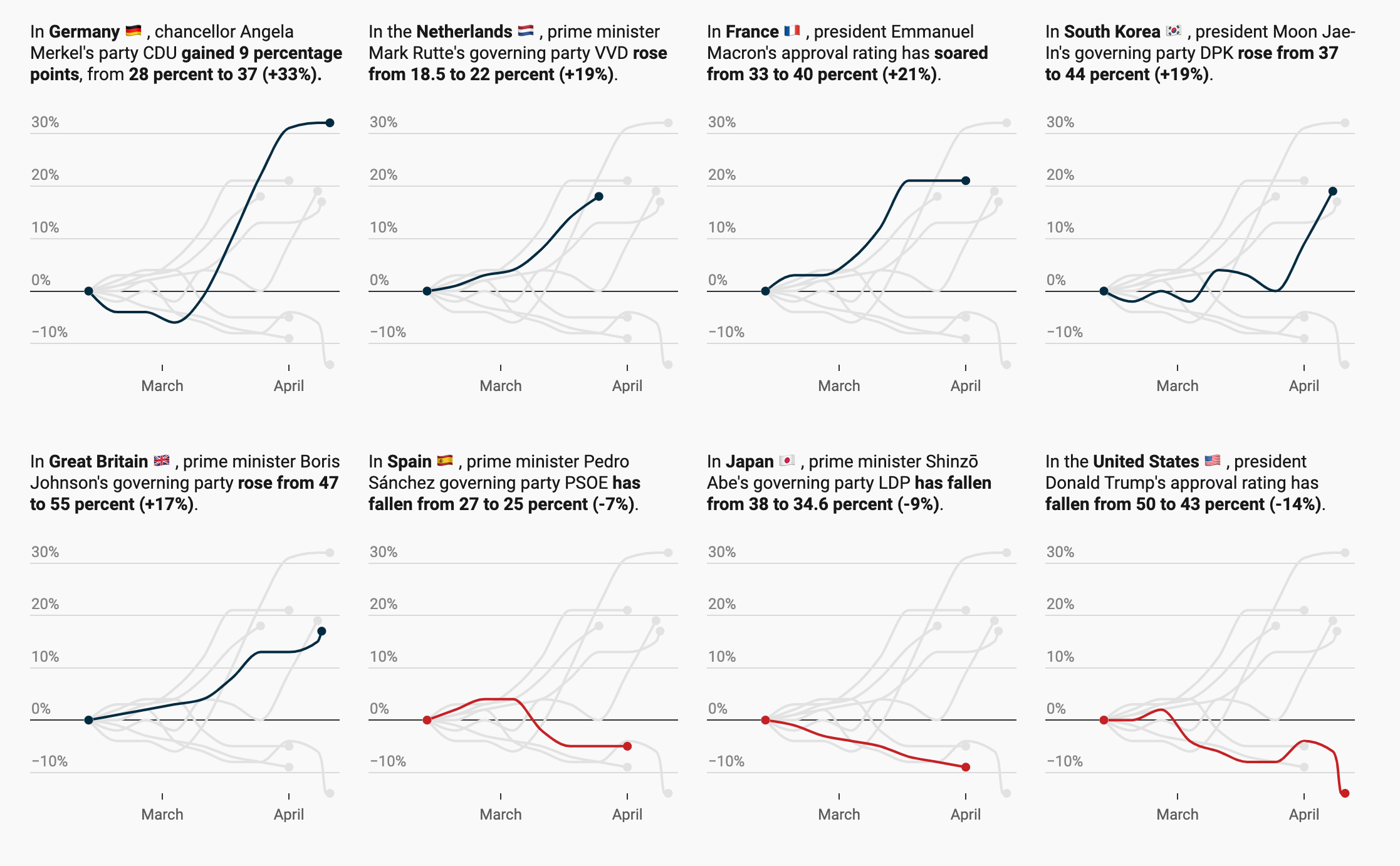 We hope that this article helped you to understand why we don't offer drop-down menus or tabs, and offered alternatives that will improve your article/website. If you still have questions, don't hesitate to get in touch at support@datawrapper.de.